On the main desk of Gabriela Aguero Muñoz’s house in Cusco are acceptance papers for ten universities, most of them written in English, one in Japanese and one in Portuguese. She is a 16-year-old girl from Cuzco in her fifth year of secondary school at Innova School. We remember that from our writing, and, a Best school reporter El Comercio in 2021.

When Gabriela turned 15, she already knew what she wanted to do in the future: study law abroad. He started surfing the internet and looked for opportunities to study outside his country. A few months after finishing school, he has already entered the 10 most prestigious courses in the world, in the first place of his promotion.

In this way, Gabriela became the first Peruvian of her age to apply for international business administration at a university in Japan, the International University of Tokyo, in charge of adding extra lines to her acceptance certificate to show appreciation and admiration. Such a young applicant. “Translating the certificate into Spanish is a journey”, Gabriela tells us.

You can read: Returning 1,200 students with disabilities to the classroom

Last year he began his applications to 25 universities around the world, two of which rejected his proposal because he was too young; Of the remaining 23, almost all went Lawand others Political Science Y International Business Management. His essays about his life, his family, and his interest in law written in English were able to convince a jury of ten universities. Gabriela’s family is now waiting to hear from 13 universities, including Columbia and Harvard.

Behind every acceptance letter is a story and a whole family discussion. “I don’t know where I’ll end up, and each time more interesting opportunities come up than the previous ones. My favorite is the University of York (UK), the law school there suits my personality as I am a very outgoing and talkative person. The lawyers they make are lawyers and go to court, but another strong preference for her is the University of Zurich (Switzerland), the seventh best university in the world.“, tell us.

His passage through Dean

“From an early age my maternal grandfather read newspapers to me, which instilled an interest in society. I always feel comfortable with the lyrics and the communication. Law is a perfect combination of both, knowing how the surrounding world and written law works in each place“, dice.

This led to Gabriela being a part of it El Comercio’s school correspondents teamAn iconic student project revived in 2021 after 9 years of inactivity to give voice to thousands of young students from across the country who wanted to write statements about the dean.

You can read: What do schoolchildren think about the consequences of domestic violence?

Gabriela He considers his experience at El Comercio valuable and contributed to his personal and academic career. “From the first moment I knew this was the opportunity I needed. Although I don’t pay much attention to journalism, writing for the most important newspaper in my country is undoubtedly something unique. I wrote and conducted interviews and learned a lot about format and how journalism works, which was a unique experience and one I remember a lot from my teenage years.“, dice.

“One of the notes I wrote, which targeted me the most, referred to a return to classrooms in my region; Challenges in the education sector in Cusco, comparing my education center with other school units. It made a mark for me as I am a believer in quality education. Telling the world what is happening here is worth it“, remember.

Gabriela tells us that leading a team of school reporters demands more responsibility from her. “Participating in co-chair meetings, keeping notes, taking notes and writing down what happens in interviews all contributed to my student life and improved my writing. I also mentioned this experience in university applications“, he added.

Gabriela and her colleagues are entitled to a report “Back to Classes: Propositions and Difficulties of Hybrid Education in Cusco“. These small reporters worked under the guidance of journalist Rodrigo Cruz and editor Karen Medina. 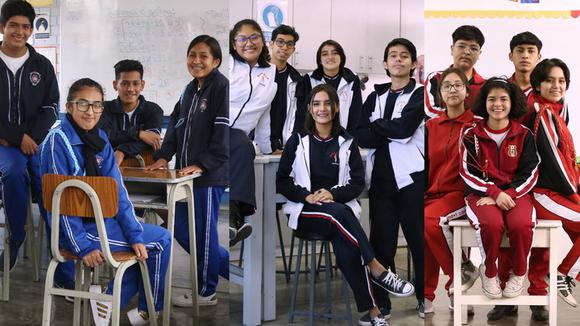